This week in our West Coast Wednesdays series we are traveling to the Willamette Valley in Oregon to discover one of Oregon’s founding wineries.  Adelsheim Vineyard is a perfect example of how the Oregon wine industry has grown over the last several decades– learn about the history, the region, and their ‘true to its roots’ newly released Chehalem Mountains 2014 Pinot Noir, Breaking Ground.

In 1971, David and Ginny Adelsheim purchased a 19-acre open field of orange and purple wildflowers.  The field was rich with clay-loam soil and had gentle southern exposure, but was sheltered by the ridge of the Chehalem Mountains (pronounced “Sha-HAY-lum”).  Although little was known about the terroir of the Chehalem Mountains at that time, the Adelsheims began planting their original 15-acre vineyard in 1972.  The first vineyard consisted of Chardonnay, Pinot Noir and Riesling, and the Adelsheims had high hopes that those varietals would produce exceptional wines that would represent Oregon’s north Willamette Valley.

Interesting fact: In 1973 David Adelsheim created Oregon Vineyard Zoning Maps to help protect current and future wine growers in Yamhill County, restricting residential growth in areas that could eventually become vineyards.  The lobbying efforts of David and others helped to ensure that Oregon’s wine industry could grow in the future.  The efforts prevailed and Yamhill County is now the center of Oregon’s wine industry.

The 80’s were a big decade for Adelsheim.  A new winery production facility was constructed adjacent to the Adelsheim’s home.  Barrels, tanks and a bottling line were added in the 6,000 square foot space, allowing for increased production.  New vineyards of Pinot Noir and Chardonnay were leased (and eventually purchased), continuing to strengthen the winery’s capacity.

By the 1990’s it was clear that further expansion was needed as the Oregon wine industry continued to flourish.  In 92′ the first of three phases in the building of Adelsheim’s current winery and tasting room began.  By 97′ the state-of-the-art, 35,000 square foot winery was complete (however it was expanded again in 2008, adding an additional 10,000 square feet and unveiling the tasting room to the public in 2009).  During this time, Jack and Lynn Loacker joined Adelsheim as co-owners, once again expanding their grape growing capacity by purchasing an exceptional 120-acre site for Pinot Noir and Pinot Gris.

The owner and visionary behind Adelsheim Vineyard, David, has helped pave the way for winemaking in the Northwest, making true impacts on the Oregon wine industry.  From the early days of planting some of the first vineyards on Chehalem Mountain, creating vineyard zoning maps to propel the growth of viticulture throughout the region, and discovering the Chardonnay and Pinot Noir clones in Burgundy, David has always been a resounding leader in the Oregon wine industry.

In addition to overseeing his company’s 45-year history, in which he’s served as vineyard manager, winemaker, and head of sales, marketing and accounting (not to mention the in house plumber), he has held several leadership roles in the industry.  In 2000, under David’s leadership, forty Oregon wineries combined their talents and resources to invite selected retailers and sommeliers from throughout the U.S. to Oregon’s vineyards and wineries where they could learn about the region’s winemaking, grape growing, and the people in the industry.  This became known of the Oregon Pinot Camp, an annual event that continues today (definitely on our bucket list!).

By 2004, Oregon had established itself as a true wine producing state.  It was at this time that David was named the first chairman of the newly established Oregon Wine Board.  The wine board was created to transition the organization from the Department of Agriculture to a semi-independent state agency with its board members directly appointed by the Governor.  Two years later David led the effort to establish Chehalem Mountains as an American Viticultural Area (AVA).

In 2012, David Adelsheim was recognized by the Oregon Wine Board with a Lifetime Achievement Award (the industry’s highest honor) for his imperative role and lifetime of service to the establishment and growth of the Oregon wine industry.  There are many that believe that without David’s passion and leadership, the industry would not be where it is today. 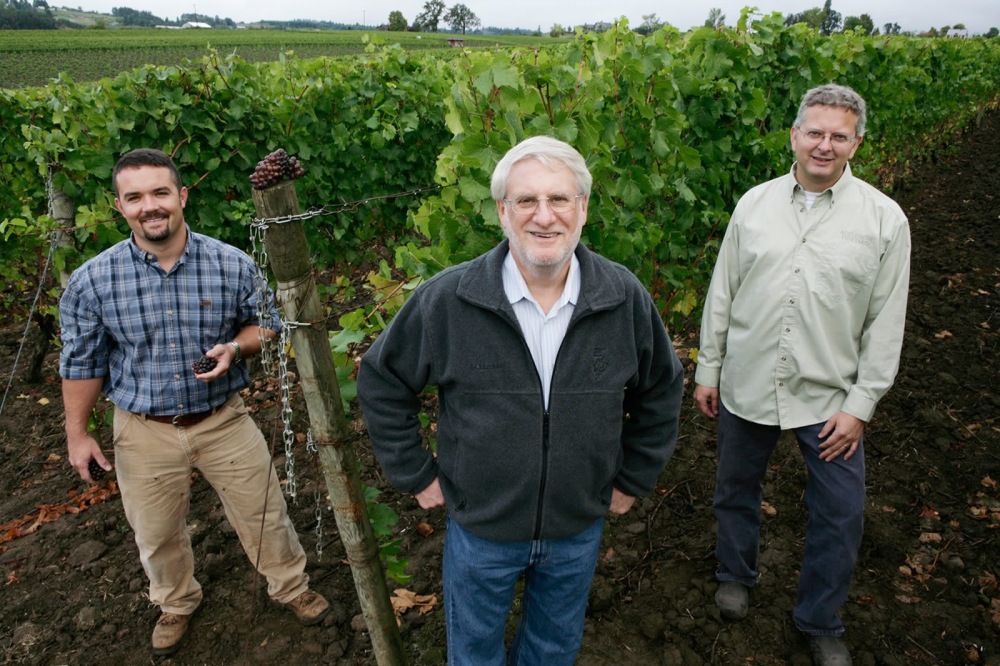 The Winemaking and Viticulture.

Dave Paige joined Adelsheim in 2001 as the winemaker.  Her earned his degree from U.C. Davis, and has worked in wineries across the world.  While making Pinot Noir at two wineries in Monterey, Dave traveled to Oregon on many occasions to compare wines and ideas with other producers.  On one of those trips, he met David Adelsheim.  The two shared the belief that restrained winemaking techniques lead to greater complexity and balance within the wines.  This encounter and discussion eventually led to Dave’s appointment as winemaker a few months later. Dave has an open-minded approach and uses both new and old world techniques to create classic, elegant wines, bringing forth the true flavors of the Chehalem Mountain terroir.

The Chehalem Mountain AVA is a very diverse wine growing region.  There are three major soil types found on the mountains– Marine Sedimentary, Volcanic Basalt and Windblown Loess– and the climate differs in almost every vineyard and in every growing season.  Adelsheim’s Pinot Noir is grown on both red Volcanic Basalt (resulting in more red-fruited Pinot Noirs) and Marine Sedimentary (resulting in more black-fruited Pinot Noirs).

Chad Vargas was brought on in 2006 to serve as the viticulturist and vineyard manager of Adelsheim (not an easy task considering the winery now managers eight LIVE-certified estate vineyards, comprising 183 acres in the Chehalem Mountains AVA).  Chad is responsible for quality control and monitoring the sustainability programs (LIVE Certified Sustainable), as well as financial planning and training related to Adelsheim’s expanding vineyard operations.  His expertise and experience in vine nutrition and disease management has helped to ensure that Adelsheim’s grapes are of the highest quality and care over the last 10 years.

Together, Vargas and Paige help to craft award winning wines that exhibit the finest qualities of the Chehalem Mountain AVA.

Adelsheim’s wines are created from the highest quality grapes through a restrained method, allowing for more complex flavor profiles.  The winery produces both whites and reds– Chardonnay, Pinot Gris, Rosé of Pinot Noir, and Pinot Blanc comprise the current white offerings, while a variety of Pinot Noir’s comprise the red wines.  Prices range from the $20 range upwards of $350 for their magnum and library wines.  The majority of the grapes used are estate-grown, but the winery does rely on some long withstanding grape growers in the region.

Adelsheim provided us with two wines to sample, a 2014 Willamette Valley Chardonnay and the newly (and much anticipated) released 2014 Chehalem Mountain Breaking Ground Pinot Noir.  Both were exceptional, exhibiting the flavors of the region and well-balanced and smooth. 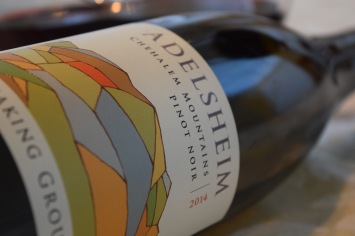 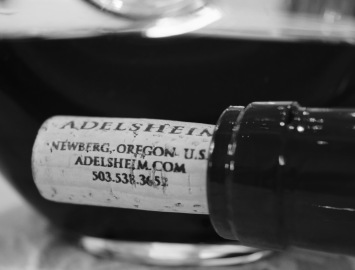 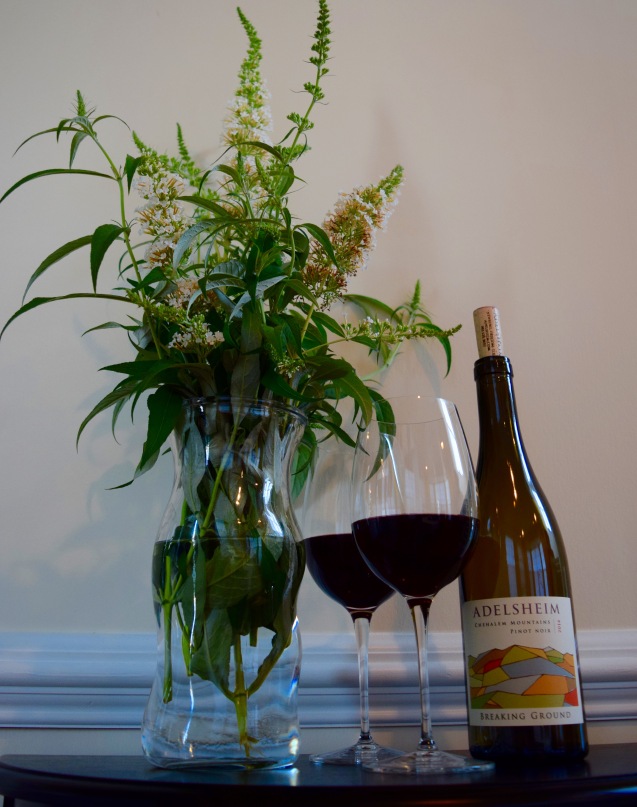 If you’re looking to try some of that famous Willamette Valley Pinot Noir, look no further.  Adelsheim is a fantastic representation of the history, the spirit, the hard working people, and the land of the Pacific Northwest. Enjoy!